The mess is gradually being replaced by progress. Here is how the front looks today: 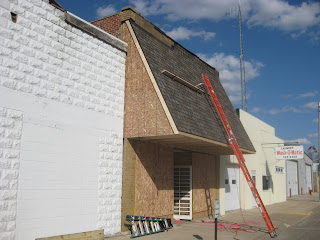 I've been talking with people, inviting them to display and sell through the Center. I hope you are one of them! I had originally thought I'd better plan on preparing a small space at the front of the store so things don't seem too spread out. Now I'm wondering if there is enough space. This is certainly an exciting adventure!

Things still look OK to open the doors June 4 with a Grand Opening July 11. Tight, but OK. When stock starts coming in May 21st, it will probably be chaotic, but it should still workout.

Steve O'Byrne and Joel of Southern Construction, the re-modelers, found the access to the attic. It is kind of neat up there. The ceiling rafters change from 4' and the rear to 8' at the front. There is plenty of evidence of the fire that closed down the restaurant that was in the building in the 30's. I need to research the building history more. With over a century of life, it has seen a lot of changes.